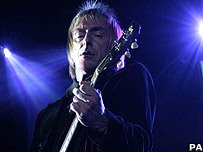 The Enemy, Dirty Pretty Things and Reverend and the Makers are among the bands who have played a gig in aid of homeless charity, Crisis, in London.

The concert, at the Roundhouse venue in London, was headlined by Supergrass.

The artists all joined up on stage at the event’s climax for the first ever live performance of Consequences, a track recorded by a rock supergroup which included the bands playing the gig plus The Gossip’s Beth Ditto.

Paul Weller also joined up with The Enemy frontman Tom Clarke to perform one of the The Jam’s signature songs, That’s Entertainment.

The Modfather then joined the band again to perform the hit single, We Live and Die in These Towns, from their chart-topping debut album of the same name.

Clarke told Newsbeat that the collaboration was intended for critics who accuse The Enemy of ripping The Jam’s sound.

“We spoke to Paul about which songs to do, and neither of us think That’s Entertainment or We Live and Die sounds like the other one.

“But I think we’re probably the only two people in the world that think that.”

The Consequences single is due out in April.

Giving it some Weller
By André Paine, Evening Standard 03.03.08

Charity concerts are often smug, insufferable occasions – but not this one.

The homeless charity Crisis staged a well-organised event that had a simple message and a big finale, with the live debut of the Consequences single featuring a stage full of indie-rock stars.

However, over several hours the procession of blokeish bands was a bit much. It really needed Beth Ditto, who features on the single but couldn’t make the gig.

New Young Pony Club’s singer Tahita Bulmer performed a typically lively set, though, and her group should have been higher up the bill.

They were certainly superior to Reverend and the Makers, but frontman Jon McClure did at least have the nerve to rage about the ticket tout outside the venue who was making money from the homeless.

Graham Coxon provided a charming if awkward acoustic set, although he was one of several acts to draw on new material, generally regarded as the height of vulgarity at charity shows.

Dirty Pretty Things also played some new songs, which were commendably punkish. And they kick-started the evening with a blaring Bang Bang You’re Dead and an effective duet with Paul Weller on his Jam song In The City.

Weller was first among equals at this show. He modestly described his own set as a “rehearsal” for his comeback later this year, but it was a short, sharp reminder of his abilities.

A new song called 22 Dreams was essentially business as usual for the Modfather, who soon had the crowd chanting to The Changing Man and That’s Entertainment.

The Enemy’s Tom Clarke featured on the latter, although his band’s performance of dependable Britrock couldn’t quite emulate The Jam.

Some of the audience left before Supergrass, but the group proved worthy headliners, even if they are closely involved in the charity campaign.

For the finale, the dozen or so musicians collaborating on the Motown-inspired Consequences did enough to suggest that it deserves to be number one when it’s released next month.

Although the obvious echo of Live Aid’s cheesy singalong perhaps explains why Weller failed to show up at the end.