Virgin Radio’s Ben Jones caught up with ‘The Modfather’, backstage at the Teenage Cancer Trust Concerts at London’s Royal Albert Hall. Listen to the full interview below where Weller claims he didn’t do much on his latest collaboration with Noel Gallagher, “I just sang and drank beer” said Weller. Isn’t that what all lead singers do?

And after playing sell out concerts all over the world Weller still gets stage fright, “I always get nervous anyway- regardless. I always have done – and probably always will do even after all these years. I think it is because it gives you a edge. If you didn’t care I think it would show in a performance.”

Paul Weller: I’ve been back from holiday, rested. Ready to return to work.

P: Because it’s about to go crazy again, 22 dreams.

P: Yeah I hope so. I hope it does. Got a new album coming out in June. And then we’re in tour in May.

P: Yeah it’s a double album. 21 tracks. It’s a bit of everything. Someone was asking Noel Gallagher what it sounded like and he said there isn’t one track that sounds like the next one really- which is probably quite accurate.

B: So you’re playing at the Royal Albert hall tonight. Are you nervous?

P: I always get nervous anyway.- regardless. I always have done – and probably always will do even after all these years. Shitting it now.

B: That’s healthy though ain’t it?

P: I think it is because it gives you a edge. If you didn’t care I think it would show in a performance.

B: You went through a period of really not liking what was out commercially, what was being played on the road. Has that changed?

P: Do you want me to be really honest? I think there is a lot of good music around, and you obviously know this it goes through cycles. Sometimes it’s a really brilliant exciting time for music and then it goes into a bit of a lull and then it starts again. Another generation reacting against the next one I suppose. I don’t know if radio reflects that, I don’t think they take enough chances if you want me to be honest.

B: Echoes around the Sun- Collaboration with Noel .I’ve heard some interesting quotes from Noel about how this song came into existence but lets hear it from you.

P: Noel had the drum track, and Noel played bass and piano. I did very little. I only sang on it. We added some strings onto it in Amsterdam. But I didn’t do too much on it really – I just sang and drank beer.

B: Sometimes does it feel like a proper job – what you do?

P: I don’t know what a proper job is because I’ve only ever done this. It’s my proper job. It’s not necessarily 9-5. When you have recorded and you have finished 21 tracks that a lot of work and is more of a mental thing rather then a physical thing. 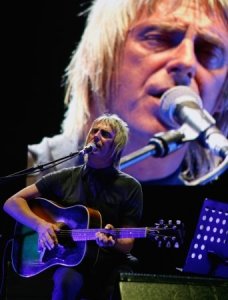 Following well-received sets from Liam Gerner and Welsh songstress Duffy, Weller took to the stage accompanied only by Steve Cradock, with the pair both playing acoustic guitars.

The gig – supported by Gibson guitars – was heavy on material from his most recent album, 2005’s ‘As Is Now’, but also featured a trio of obscure songs by first band The Jam in the shape of ‘Beat Surrender’, b-side ‘Shopping’, ‘Start!’ flipside ‘Liza Radley’ and ‘Strange Town”s other half, ‘The Butterfly Collector’.

Other highlights included a version of ‘Stanley Road’ closer ‘Wings Of Speed’ with Weller on piano, ‘From The Floorboards Up’ b-side ‘Oranges And Rosewater’, and a new song from the Modfather’s forthcoming ’22 Dreams’ album entitled ‘Why Walk When You Can Run’.

Guitarist Cradock was also briefly given a chance to shine, performing his song ‘Beware Of Falling Rocks’ solo.

The set climaxed with a beautiful version of ‘You Do Something To Me’, followed by a rousing rendition of The Jam classic ‘That’s Entertainment’.

‘Savages’
‘Shopping’
‘Who Brings Joy’
‘Oranges And Rosewater’
‘Hung Up’
‘Sweet Pea, My Sweet Pea’
‘All On A Misty Morning’
‘Pan’
‘Wings Of Speed’
‘Into Tomorrow’
‘Roll Along Summer’
‘Liza Radley’
‘The Butterfly Collector’
‘Beware Of Falling Rocks’ (Steve Cradock solo)
‘Why Walk When You Can Run’
‘Foot Of The Mountain’
‘Shadow Of The Sun’
‘I Wanna Make It Alright’
‘Come On/Let’s Go’
‘You Do Something To Me’
‘That’s Entertainment’