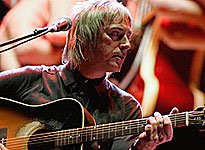 From BBC 6 Music:
Paul would like to tour his new record in full

He starts his UK tour in May, but admits that it could be a logistical nightmare: “I’d love to play the album in full – I’d love to, but some of the tracks…we would probably have about 27 musicians on stage, do you know what I mean?

“So without us using tapes which we’re not keen on doing – its very difficult. Some of the things we just couldn’t replicate.”

Paul went on to talk about the new album: “I think probably overall the album’s probably a bit more produced than what I’ve done in recent years.

“Not over produced but it’s got more production I would say anyway – which is not always the easiest thing to put over live.

“I’m excited about playing to people – I’m really excited about people hearing the album. I can’t wait for it to come out really – you know it’s always hard to go on tour and play the new tunes before the album’s out.

“People don’t necessarily know the songs but then that’s the challenge as well…turn people onto the songs they haven’t heard before.”

Echoes Round The Sun

For one of the songs on the album, Echoes Round The Sun, Paul worked with Noel Gallagher and Oasis guitarist Gem. He revealed why the track had been a long time coming.

Paul said: “Cos we’re using some different people this time, you’ve got a different drummer and bass player and a keyboard player, so it does have a little bit of a feeling of sort of starting again to be honest with ya.

“He (Noel) had a backing track or at least an idea for a backing track and he had the drums and he came down and played bass and he played keyboard and Gem put the guitar on top.

“So they kind of had an idea of musically how it should be anyway.”

He went on to talk about the writing process, Noel had the music sorted: “I was a bit too self conscious to do it in lots of ways, you can’t sit in a room with someone – well you can but we couldn’t sit in a room together and try and write a song. It would be very difficult.”

But what about further collaborations with Noel?

Paul said: “Y’know it came together really easily so I don’t know if we would like to be together making an album for months on end.

“I don’t think that would work but I think it’s good for like a one off track – for a one off tune here and there yea.”

Echoes Round The Sun will be released alongside Have You Made Up Your Mind to comprise the first release from Weller’s forthcoming album on 26 May.

Paul Weller starts his tour on 5 May at Halifax Victoria Theatre.

The track listing for 22 Dreams is: