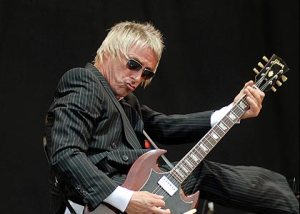 Paul Weller has denounced the Glastonbury festival, pointing towards the bad weather the festival has experienced of late.

Weller also pointed to the kind of people who went to the festival, claiming that recently festivalgoers hadn’t been as big music fans as previously.

Comparing his performance at last year’s festival to that in 1994, Weller told BBC 6Music: “The difference between doing it in ’94 and doing it last year was that most of the audience knew the greatest hits, whereas in ’94 they were music fans. You didn’t just have to do the greatest hits, that was very noticeable to me.”

“The conditions are disgusting aren’t they?,” he continued. “I don’t know how people can… I mean, you’d have to be off your box to stay there for three days wouldn’t you?”

“I’m not a big lover of festivals at the best of times, I like proper gigs… and it’s just really corporate now isn’t it?”