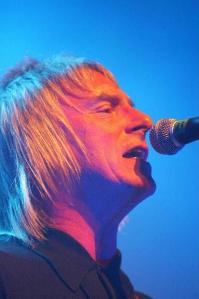 All Well And Good At 50 For Paul Weller!

FOR someone who was recently accused of having ever-changing moods, Paul Weller claims he is happier than ever as he prepares to turn 50.

The modfather hits his half century on Sunday and is marking the milestone with the release of a double album, 22 Dreams, featuring 21 diverse tracks over two CDs.

Paul’s latest solo album is his most ambitious to date, with songs that span musical styles including soul, funk, electronica, rock, jazz, folk and avant garde over 70 minutes.

And he admits turning 50 inspired him to go for broke with his latest batch of songs.

“I was conscious of turning 50,” Paul said. “It had a bearing on the album. I really wanted to push the boat out and create a big body of work with as many tunes as possible.

“I wanted to do something grand for my 50th. A lot of artists at, or past a certain age, have all their best work in the past, it’s fair to say, and I wanted to disprove that notion.

“And I think I really have, if that’s not too arrogant a thing to say. I just wanted to go for it and try and attain my best work.

“I like the idea of something people can keep going back to and hear something different each time.

“Something they might not hear the first time, they might hear six weeks or six months down the line.

“The album is reflective of my listening taste. I listen to any sort of music really. It’s a bit of everything. I’m very pleased with the album. I think it is up there with my best work.”

He collaborates with Oasis rockers Noel Gallagher and Gem Archer on the latest single, Echoes Around The Sun.

Paul and Noel have discussed writing a song together since the Britpop boom of the mid-1990s, when the pair became friends. Finally, Paul decided to turn their intention into reality.

“I just picked up the phone and asked if Noel fancied doing something,” he said. “We’d been talking about trying to write something together for ages and never got round to doing it.

“It would be really hard for us to sit in a room like this, with two acoustic guitars trying to bash a song out. I’d be too self-conscious, like most writers.

“But Noel came along with an idea on a backing track that wasn’t fully formed and we jammed on top of that. It was quick and simple and we did it in the space of an afternoon.”

The pair have become the closest of friends over the years.

Paul added: “What is it about any friends? You just click with people. We don’t agree on everything and we’re very different in lots of ways. But we have a mutual respect. We’re from similar backgrounds and have a lot of common ground.”

The album follows a spell of four years during which he rarely put pen to paper, fuelling reports Paul was suffering from writer’s block.

But he insists he didn’t panic when the songs dried up and knew he would be inspired sooner or later.

“It wasn’t really writer’s block. I just wasn’t writing,” he admitted. “Years ago, I would have been freaking out when I couldn’t write for a period of time but I am old enough to know it goes in cycles and I have to wait.

“I wasn’t pulling my hair out. I thought, if I never write again that’s fine and, all of a sudden, it came round and I wrote 27 tracks.

“I still remember when I was younger thinking it was all over but I’ve learned the songs come in creative cycles.” The new album, which also features Steve Cradock, Graham Coxon and John McCusker, is a far cry from his earliest work with The Jam, who enjoyed 18 consecutive Top 40 hits starting more than 30 years ago.

The Jam recorded their debut album, In The City, released back in 1977, at the height of the punk explosion. A second album, This Is The Modern World, followed the same year before the classic, All Mod Cons, when Paul was just 20.

Amazingly, the man who has influenced generations of guitar bands said he thought the third album by The Jam marked the end of his career in music.

“I couldn’t envisage I’d still be doing it but I’m awfully glad I am, I know that. It seemed monumental turning 21 when our third album was out.

“I had started young. I was 18 when we made the first single and we made the first two albums in the same year. So yeah, there was a definite progression between the first and third album but the second one was a bit forgettable.

“From the third album, we really got it together.

I got serious about the writing and got my teeth into it. And I think success is a good thing sometimes because that album was really successful and spurred me on.

“Just getting that nod from people who told me it was good made me want to reach for bigger and better things.”

At the time, Paul refused to be drawn on whether The Jam were punks or mods – a debate that raged and seemed all-important to the fans of both subcultures in those days.

“I always fell outside of all those cycles,” Paul recalled. “I loved the punk thing. As a 17-year-old, I saw the Sex Pistols and The Clash, it was just what our age group needed.

“But I could see it wasn’t going to have any longevity and I was always into music rather than one genre.

“I listen to all sorts of music at home and the common thread is greatness and how it affects you.”

By 1981, the trio were so successful they made it into the Top 30 with the single, That’s Entertainment, despite the fact that it had only been released in Germany.

Fans snapped up copies on import sending it into the charts without it being released here.

But by then, Paul was itching to leave The Jam, which he disbanded in 1982, before forming The Style Council with Mick Talbot and Steve White. They enjoying another 15 Top 30 singles before Paul went solo in 1989.

As he relaxed after a sound check backstage at Dundee’s Caird Hall, the prolific singer-songwriter admitted he is more than a little miffed that his old band mates from The Jam – drummer Rick Buckler and rhythm guitarist Bruce Foxton – are still playing those songs long after he disbanded the band back in 1982.

Paul said: “I have to be careful what I say. I’ll try to be diplomatic but it doesn’t please me. How would it? It slightly spoils the legacy for me. I think it was great what we did at the time and I think that’s where we should leave things really.

“But everyone’s at it. Everyone’s reforming.

Even bands from the 90s, which wasn’t that long ago, are reforming but I’m not into any of that, to be honest with you.

“I’m for the future and going forward. Nostalgia is big business for some weird reason but it can never be the same. How can it be?”

He does, however, look back fondly on his first dates in Scotland, including Glasgow’s Zhivago’s with The Jam more than 30 years ago, when admission cost just £1.

“The shows in Scotland have been wicked,” Paul said. “I look back on those days with fondness. I have great memories of those times.

I remember the Glasgow Apollo. Those gigs were mental. It was a running battle with the bouncers.

I remember the balcony used to move. The Playhouse in Edinburgh was good as well. The first time we played in Glasgow was at Zhivago’s.

‘I have great memories of those times at the Apollo in Glasgow, those gigs were mental’