Here’s a few pictures and the set list for Paul’s concert Saturday, 21 June 2008 at KOKO in London for XFM Radio.

It’s been said that you should never trust a band that doesn’t sweat. That being the case, the amount of faith handed over to Paul Weller at KoKo is colossal and somewhat justified. Dipping – and indeed, dripping – liberally into his new album, ’22 Dreams’, the Queen Mum of Britpop, Gawd bless ‘im, is still burning with a passion that belies his years. ‘Echoes Round The Sun’ is a psychedelic delight while ‘Push It Along’ merely confirms the Modfather’s continued ability to belt them out with the best of ’em. Nothing though, compares to the feverish response that greets a frenzied ‘Eton Rifles’ that sees Weller reclaim it from those who recently misappropriated it. Cappuccinos all round, then!

Courtesy of Pete aka The Eton Rifle 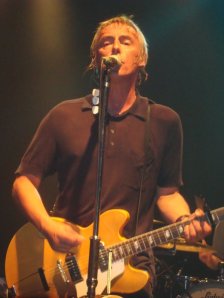 Peacock Suit was not played.