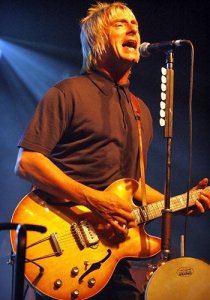 He’s known as “The Modfather” – and last night Adelaide was treated to a lesson in culture from the man who started it all, Mr Paul Weller.

In the dimly lit Thebarton Theatre, a now not so “modern con” looked and played as youthfully as ever with a near capacity crowd lapping up every soulfull note.

The former Jam front man belted out early numbers such as “All I Wanna Do (Is Be With You)” and “Out Of The Sinking”. He had the mature crowd in a daze, and let’s face it – Weller could have played Andre Rieu covers for an hour and a half and still engaged the audience.

“Push It Along” was an early indicator of the crowd’s restrained joy. People from all walks of life – from former mods sitting comfortable up the back, to the new found fans with skinny stove pipe jeans both nodding approvingly.

Weller was energetic for the entire show, constantly offering praise to the rowdy audience in between drags of seemingly endless cigarettes.

“Picking Up The Sticks” brought Weller back to the piano where an extended jam showcased the musicianship that would not be overshadowed by Weller’s larger than life reputation.

Fans got plenty of Mod for their money with the now legendary singer belting out tunes for more than 100 minutes. A brief exit sparked a roar from the crowd, bringing Weller and Co back to the stage for a few more hits.

“Broken Stones” and “The Changingman” were powerful encores – but it was the finale of the Jam’s classic “A Town Called Malice” that was the showstopper.

When the opening bassline thumped out of Andy Lewis’ instrument, there was a deafening roar only overshadowed by an organ line familiar to any true British rock fan.

It was to see the effect that Weller, mod culture and the Jam has had on the Adelaide audience. The entire theatre rose to their feet for a glorious sing a long to an anthem that much like Weller, has stood the test of time.