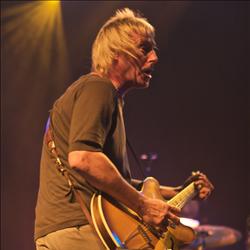 Paul Weller Drops In After 23 Years!

I have never heard so many English accents at an Aussie gig as I did on Saturday night before the Paul Weller show. We aren`t talking local Melbourne based fans either. One guy told us he had flown from Perth just to be there.

Being in the audience for The Modfather was just part of the appeal. Seeing Paul Weller play at a 2000 capacity venue sealed the night for the English fans that would expect to see him in arena shows back home.

Then again, Paul Weller is not that well known as a solo act here. While he logged up more than half a dozen hits with the Style Council and was at the forefront of punk with The Jam, his 9 solo albums never made an impact in Australia despite all being Top 10 hits back home.

“Sorry it has taken me 23 years to come back,” Weller said as he belted into the first song `Peacock Suit`. The fans didn`t mind but Karma decided to punish him halfway through the show when the sound packed it in. “Next time I`ll bring my own generator,” he said laughing it off.

As soon as the first notes of `Peacock Suit` hit, it was obvious that this was going to be one of the year`s great gigs, and we weren`t disappointed. Weller even did `A Town Called Malice”, his 1982 hit from The Jam.

The classic hits were few and far between. There was only one Style Council song (Shout To The Top), and only two other Jam songs, one being the obscure `Carnation`. `Eton Rifles`, however, went right off.

The solo songs are not that well-known in Australia and with a setlist heavily based around a new album `22 Dreams`, this could have gone either way. Weller could have turned the show into a homage to his hits, but he didn`t.

The title track from `22 Dreams` is very Jam sounding, and with his best known song in Australia, `The Changingman` up front in the setlist, Weller pretty much established the template for tone of the show from the start.

The Beatles ‘All You Need Is Love’ was a nice impromptu play that was not on his setlist.

If he could ever get over his own negativity with his past, imagine a show of The Jam and Style Council plus his best solo songs added in.

The Police held it together long enough to get through a tour. The Eagles manage to do it reluctantly as well. The Jam are one of those bands we all want to see do it at least one more time.

But until then, this is what we have: