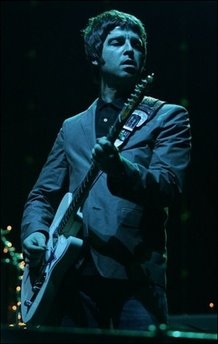 By CHRIS BEANLAND
The Sun

PAUL WELLER is a man who’s been in the right place at the right time throughout his career.

And that was true when he saw OASIS on the night NOEL GALLAGHER was shoved over by a stage invader.

He said: “I was standing right by the side of the stage and it was so quick I didn’t even see it happen – but I saw the commotion afterwards.”

Noel was assaulted and pushed into a monitor by a crazed Canadian at the gig at V Festival in Toronto on September 7.

But such was the speed of events that the full scale of what went on only became apparent afterwards.

A shocked Paul confessed: “I didn’t see the geezer come out – it was that quick! I didn’t know what had happened until straight after.”

But despite the assault, Weller reckons that Oasis played one of the best shows of their lives that evening.

He said: “They still played an incredible gig that night. That was one of the best times I’ve ever seen them. They were on fire. They were f***ing great.”

People have been agreeing that Oasis are back on form after a few years of treading water – and the same could be said about Weller.

With latest album 22 Dreams, he’s got the stamp of critical approval and a new audience of fans eager to hear his more experimental material.

Paul said: “I worked with Noel Gallagher on this record but that wasn’t what was planned – it just happened. I do like the new Oasis album. I like bits of it an awful lot. They’ve tried to take it on a bit. “

On his own new songs, Paul said: “I wanted to make something different, just for my own sake. I wanted to play with the sound and try and take the music somewhere else. Just to make it interesting for myself, to see what’s out there.”

He uses more abstract sounds and different arrangements on his ninth solo album, adding: “It’s like part two now – I wanted to go somewhere else with this album and see what the outcome was.”

Paul – who found fame with THE JAM then STYLE COUNCIL, before pursuing a solo career entwined with the Britpop movement of the 90s – is back to his moody, manly, song-writing heyday.

He confessed: “I do feel like I’ve got a second wind, definitely. With this new record but also with the new band. We’re just firing again and there’s a new enthusiasm and a new energy with the whole thing.”

“I can’t say I lost the excitement but I was just somewhere else for a bit. It’s gone to another level for me now. You have to hang onto that and run with that – I’m very conscious that there is that. It’s a special time.”

And Paul is proud that young bands are proving so successful at following in his footsteps, especially Jam-aficionados THE ENEMY.

He said: “Listen, that’s one of the best compliments anyone can ever pay me as a musician or a writer. I genuinely like The Enemy and Tom’s lyrics are a great.

“It’s just nice to have a band who are trying to say something about people’s lives. For a new generation.”

Paul’s own son NATT – from a previous relationship with Style Council singer DEE C LEE – is trying to find fame with his own brand of goth/electro pop.

Weller Senior is currently out on the road touring the world and hits our shores for a UK tour beginning in Crawley on November 6.

He said: “I love to play man, that’s never a problem. Some places they aren’t necessarily that familiar with the new stuff. But I think it’s a testament to the quality of the new stuff that by the end of the song people are having it.”

And he’s also getting nostalgic by releasing a four CD box set of radio sessions titled Paul Weller At The BBC.

He said: “I wasn’t averse to it when the idea came up, I actually quite like the idea. I’ve always liked those radio sessions. It always takes it to a different dimension when you play live.

“You’ve only got one chance to get it right – flying by the seat of the pants, you can’t go back and re-record it. “

After completing the world tour in December, Paul plans to rest for a while – but not too long. He revealed he wants to get back into the studio as soon as possible.

“I’ve got December, January and February off and I’ll probably just go back in the studio and experiment really.

“See what it leads to. I’m still fired up by this stuff. I’m just enjoying it, I’m happy doing it.”

Paul Weller At The BBC is out November 4