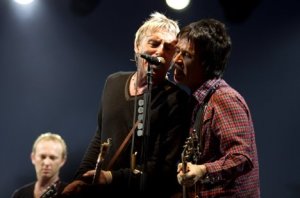 I could go on endlessly about the excellent yet heartbreaking Paul Weller set no one watched. I just might blather more about it once I get home and have time to properly assess and convey why it was such a meaningful (albeit needlessly stopped) performance, both for artist and audience. (It also might make my annual Kill List, a rundown, in ranked order, of the weekend’s greatest performance. Look for that sometime Tuesday.)

After roughly a half-hour of top-notch rock ‘n’ soul, culminating in some extra-fine space-jamming on “Porcelain Gods,” Weller was informed that he had a measly 15 minutes left. “Just not long enough in the desert,” he sniffed in between expletives.

He had every right to be pissed. There was no reason to quit early: Public Enemy didn’t need an hour to set up, it wouldn’t have harmed My Bloody Valentine any to have Weller carry on, and yet another rumor that No Doubt would turn up for a five-song surprise never came to pass. Let the man play! Imagine how much more fulfilling this set could have been with more morsels served up within another 20 minutes, instead of a flat 50.

Not exactly the right way to treat a Coachella forefather.

But suffice to say -– and I’m talking to you, Mozheads, after you watched your ’80s idol act the diva Friday night –- this is how an English icon soldiers on when faced with a demeaning concert situation. Like Atmosphere says, when life hands you lemonades, you paint that s*** gold, (bleeper-bleeper)!

Had Weller been squeezed onto the main stage, people might have at least taken notice of the old leader of the Jam and the Style Council. Perhaps then he’d have gotten his due around here, maybe via the chanting of “Eton Rifles,” one of the most biting Jam songs, about a different, even refined sort of class struggle than the Third World uprising M.I.A. calls for.

Surely casual ears would have recognized “A Town Called Malice,” although probably only as “that song by that guy who did that other song.” They still would have bounced and wiggled along to its deceptive Motown glee.

Instead, to cap his Sunday show, the now silver-haired Weller, looking Armani casual cool in a black outfit, was left to kick against the pricks in a chugging rendition of his minor MTV hit with help from … well, how nice, former Smiths guitarist Johnny Marr, who strummed a bit and shared in on the bop-bop-bop-bop harmonies.

Wait, what? You didn’t catch that killer moment? Oh well — your loss, our gain.

From The OC Register