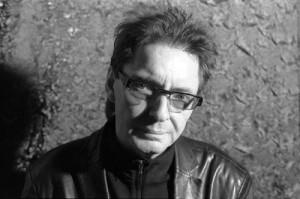 The former bass player with one of Britain’s best-loved bands, The Jam, is en route to West Yorkshire next week to perform a string of classics from the ’70s and ’80s.

“Holmfirth – isn’t that where they made Last of the Summer Wine?” asks the 53-year-old star. “I played there in the past with Stiff Little Fingers…It’s got a full-size snooker table in the dressing-room. I’d better get practising.”

Bruce is returning to this corner of the England next month with his latest band, From The Jam. A homage to his past, the band also features one-time Jam drummer Rick Buckler and singer and guitarist Russell Hastings, a longtime Jam fan, formerly of the mod band Maximum High.

The gig is part of a short summer summer tour that marks the band’s return to the live arena after a difficult few months for Bruce.

“Personally it’s been a tough start to the year with the loss of my wife (Pat, after a long battle with cancer),” he says. “The band have been really supportive. We’re just putting the wheels on again with a few dates. We just want to get moving again.”

It will also be From The Jam’s first dates without their second guitarist and keyboard player David Moore, who, says Bruce, left the band amicably “to pursue other business interests”.

They’ve just recruited a replacement for their UK shows “and further afield we will be a three-piece, just like the old days. We rehearsed the other day without a keyboard player and it was great to hear it again.”

As he recalls, The Jam were not averse to augumenting their line-up in the early 80s with “girly singers and brass”. “We were always looking to add something to the songs. We were not shy of trying things.”

Bruce is full of praise for Russell’s contribution to a role once filled so effectively by Paul Weller.

“Russell was a big fan of The Jam,” he explains. “It transpires that he was at the last show we performed in Brighton in 1982. He’s just perfect. He’s got his own take on the songs. He happens to sound like Paul but it’s not manufactured, it’s just how he is. He fits the bill all round with his passion and enthusiasm.”

In their eight years together, The Jam recorded more than 100 songs and became the first band since Slade in the 1970s to have three singles enter the charts at No.1. Compiling an hour-and-a-half setlist from such a weighty songbook poses a few problems as “everybody in the band has their own favourites”, admits Bruce, but “we’re getting round to each other’s preferences the more we go out”.

“We’re very lucky,” he adds. “It sounds bigheaded but we have this great catalogue of songs to go out with. Obviously there’s a list of singles but we manage to get other tracks in there. We’ve just been rehearsing Monday from Sound Affects. I don’t think even The Jam played that live – I can’t find any YouTube footage of it or record. We thought we’d give it a whirl.”

He’s enjoying things so much he doesn’t even mind if the band drop some of his own songs, such as Smithers-Jones and News of the World, from the set.

“I think sooner rather than later we’re going to give them a bit of a rest. News of the World is going down as a one of the favourites with the audience. I enjoy playing it. It gives Russell a break from singing and it splits the set up a bit. But I would not be offended if they said, ‘We’re tired of this one. Could we give it a break for a bit?'”

Looking back, Bruce has nothing but fond memories of his time in The Jam. Their success from 1977 onwards certainly justified his decision, three years earlier, to quit the “progressive rock band rehearsing in a village hall” that he’d been in for life on the road with Rick and Paul, and Paul’s father John, The Jam’s manager.

Initially Bruce was the band’s rhythm guitarist but when their fourth member, Steve Brookes, left “I was handed the bass from Paul”.

The Jam arrived on the pub circuit in London “just as punk exploded”. Suddenly guitar solos and bloated rock star excesses were out and snappy three-minute songs and youthful energy were in. Punk, says Bruce, “gave Paul a direction which he really liked” and gave the band “encouragement to keep going”.

“I don’t think there has ever been something like that since,” he reflects. “Good bands have come out but there has been no explosion (like punk). It gave the industry a kick up the backside.”

Ask Bruce for his happiest memory of The Jam and he’ll reply he’s “so fortunate to be able to say there are too many to mention”. He relished so much of it “right from getting the record deal” with Polydor to Going Underground becoming their first UK No.1. “There are still a lot of fond memories…Daft things, like hearing In The City being played on the jukebox in your local pub and just getting your first record in your hand. It was very exciting.”

Even more fortunately, he and Rick “have still got that buzz” that they had when they first performed this material in their early twenties.

There’s lingering sense for them both that The Jam ended too soon, when Paul Weller quit the group at the height of their fame in 1982. “We were at the top and I felt we had not exhausted our musicianship and a direction,” Bruce says now. “I felt we had a lot more to offer. I felt frustrated.”

After The Jam split, Bruce pursued a brief solo career whose “mediocre success” convinced him “that I function better as part of a band”. There was, he recalls, “not an awful lot of quality control from the label”.

“On reflection they were just cashing in. It was supposed to be a three or four-album deal. I would have liked them to have said, ‘No, Bruce, you can do better.'”

When the offer came to join his old friends Jake Burns and Dolphin Taylor in Stiff Little Fingers he “jumped at the opportunity”. He was with them for 15 years (“We had a cult following and we went down very well”) but left in 2006 to form the shortlived Casbah Club with Pete Townshend’s son, Simon.

In 2006 the Casbah Club shared a bill in Guildford with Rick Buckler and Russell Hastings’ then band The Gift. Bruce was tempted to play a couple of old Jam songs with his former bandmate and a year later From The Jam was formed.

Paul Weller hasn’t always been complimentary about this partial reformation of his old band, but he and Bruce and now firm friends again. Bruce steers clear of mentioning a full-scale Jam reunion with the singer – “I don’t even discuss it with him, I know the answer” – and in turn Paul “doesn’t even comment on what I’m doing”.

“He has been very kind over the last few years – that’s more important to me,” Bruce adds.

Now Bruce is trying to strike up a songwriting partnership with Russell Hastings. One track, Later Day, “went down really well” when they played it live with From The Jam last year, but “it’s very early days working with Russell”.

“If we think we’ve got enough good songs we will put out an album,” he says. “We will push on. I don’t know how quickly it will be but we’ve been going into a little studio and trying. Sometimes nothing comes of it and you think I’ll just go off and play a round of golf again. We will see how it goes.”

In the meantime there are more gigs to think about. In the autumn and winter From The Jam will be touring again – they play the O2 Academy in Leeds on December 6 (Rick’s 54th birthday). The month before will be the 30th anniversary of the release of The Jam’s album Setting Sons, which included their first top 10 hit Eton Rifles.

“It’s something that the winter tour is hanging its hat on, so to speak,” says Bruce, promising the band’s set will include several numbers from their landmark record.

“It’s amazing,” he reflects. “It really does hit home when you say the 30th anniversary. It doesn’t seem or feel that way, to be perfectly honest.”