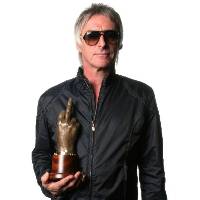 Chart veteran Paul Weller is to receive a top honorary prize at this year’s NME Awards, the annual Godlike Genius title, it was announced today.
The former frontman for The Jam will receive his award later this month and perform at the event which takes place at the O2 Brixton Academy in south London.

The bash, officially titled the Shockwaves NME Awards 2010, is to be hosted by Jarvis Cocker and will be staged on February 24.

The winner of the Godlike Genius award is chosen by music magazine NME to honour a figure or group who has helped to shape the musical landscape over the years and past winners have included New Order, The Clash, Ian Brown and Manic Street Preachers.

Weller achieved a string of hits with The Jam such as Eton Rifles and Start! before they disbanded in 1982. He bounced back with The Style Council the following year and then launched a solo career in the early 1990s, achieving hits such as You Do Something To Me, Wild Wood and The Changingman.

Modfather Weller said: “I’m very happy to accept the award, I don’t feel Godlike or a Genius but I’m happy to have it. It’s nice to be recognised, you get your rewards in other ways too like playing live and seeing people’s reaction, but it’s nice to be recognised. I’m very flattered. I shall find a special place for it. A little altar to myself with garlands of flowers around it.”

NME Editor Krissi Murison said: “Paul was first on the cover of NME with The Jam in 1977 and then again when he reinvented himself with The Style Council. Three decades on he remains just as influential as a solo artist – and it’s this connection with the current music scene which makes him all the more Godlike.”

Cocker, who last year became a presenter on BBC 6 Music, said: “I’ve been to these awards things and I’ve read out nominations and things like that but I’ve never anchored the whole show before. That’s a challenge. But yeah, I hope to keep people interested, stop them from dropping off …”