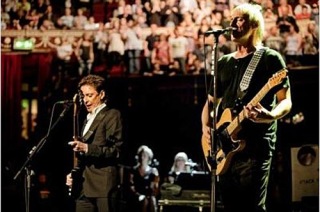 AN UNEXPECTED reconciliation with former Jam bandmate Paul Weller has led to a creative rebirth for Bruce Foxton. The bass player with Britain’s most successful band of the late 1970s and early 1980s comes to the Hall for Cornwall on Tuesday with From The Jam.

But that group has moved on – no longer just a vehicle for performing the old Jam classics, Bruce, singer/guitarist Russell Hastings and former Big Country/Cult drummer Mark Brzezicki are now playing originals too.

Bruce told me: “Two-thirds of a new album has already been completed at Paul Weller’s studio and it will be released next year, probably under the name Foxton, but it will still be the members of From The Jam. We will be playing two or three of the songs among the Jam stuff in Truro – hopefully Jam fans will relate to it, as there is a similar feel, mostly down to Russell’s vocals which share a Weller vibe.”

“Ray Davies is on one song and it looks as though Steve Cropper will be on another. He’s one of my musical heroes, so to have a legend like him on the album is amazing. Funnily enough there is a Motown feel to some of the songs, but the one he’s due to play on is the most un-Motown of the lot.”

Paul Weller himself is also on the album – a move which definitely wouldn’t have happened anytime in the last 30 years until now. Bruce explained: “Paul heard through a mutual friend that my wife Pat had been diagnosed with cancer. While she was having treatment in Israel, Paul rang to wish her well. Sod’s law, I was down in the hotel bar and missed the call, but when I got back, she said, ‘you’ll never guess who called’.” Sadly Pat, who Bruce had been with for more than 30 years, later died but he is delighted she got to hear Paul and Bruce’s musical reconciliation on the song Fast Car/Slow Traffic on Weller’s last album. “I was devastated when she died and completely lost interest in the music, but I knew Pat would want me to carry on and since then the songs have been flowing.”

The rekindled friendship with Weller does beg the question, will we ever see a full Jam reunion? “Well, Paul is obviously very successful, we have this new album and Rick (Buckler) is in a new band, which I’m really pleased about, so I don’t see it happening. But it would certainly pay off my mortgage. Actually, even though it sounds poncey, if we ever did re-form it would have to be for artistic reasons. It would never be just for the money.”

Don’t hold your breath then. In the meantime, make sure you see From The Jam – so much more than a tribute band. For tickets priced £20 plus booking fees contact the box office on 01872 262466 or head to http://www.hallforcornwall.co.uk See next week’s What’s On for an interview with former Jam drummer Rick Buckler, whose new band if… also play in Cornwall this month.

From This Is Cornwall