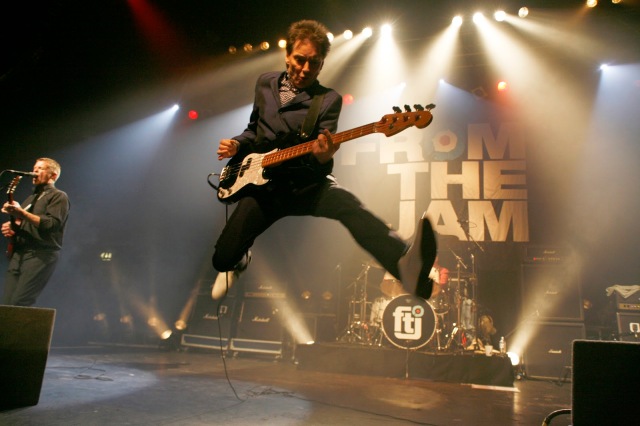 BRUCE FOXTON is a happy man. A new wife, a new album and a reunion with his childhood friend and former bandmate Paul Weller have helped turn his life around.

The man who played bass and sang with Woking’s most famous musical sons The Jam was left distraught in 2009 when his first wife, Pat, lost a prolonged battle with cancer.

But gradually he has rebuilt his life and his career and he’s happier than he has been for years.
He married new wife Kate last summer, is putting the finishing touches to his first new album in years and he’s done it with the help of former Jam colleague Weller.

The album has been recorded at Weller’s studio in Ripley and he has added guitar on three tracks.

“It’s quite upsetting to talk about,” says Bruce when he looks back on Pat’s battle with cancer, as he prepares to play Wake Up Woking 3, a benefit show for the Woking and Sam Beare hospices on Friday, June 22.

Although Pat was never treated at either hospice, John Weller (father of Paul and manager of The Jam) was, so Foxton is only too pleased to help out because he knows the pain cancer causes.

“I still think of Pat and I loved her dearly and wish she was still here – you can’t stop that. But Kate’s been fantastic, she’s made me smile again.”

“Pat had bowel cancer and they operated and she had 15 clear years,” he recalls. “But then she got breast cancer, they gave her chemo to clear it but then it was in her lymph glands. She had treatment in Israel. We decided to try it even though it hadn’t been fully tested. But in the end it became too much for her.”

“It was an awful time for everyone, not just me. Pat’s sister Jackie I know misses her terribly too. In the latter stages of Pat’s illness I always knew when she was on the phone to Jackie because I’d hear her laugh – it was the only time by then.

“She was happy I was still playing music and really pleased I was back in touch with Paul – I’m sure she’s looking down now.”

Bruce’s personal life has taken a turn for the better in recent months with his marriage to Kate.

“It’s hard, but you have to keep going and Kate’s been great for me,” he says. “I still think of Pat and I loved her dearly and wish she was still here – you can’t stop that. But Kate’s been fantastic, she’s made me smile again.”

One bright aspect of Pat’s illness was that it led to a reunion between Foxton and Weller. Bass player and singer had not spoken for more than 20 years following Paul’s decision to quit The Jam in 1982, but when the frontman heard about Pat’s condition he got in touch.

Bruce says: “My wife suddenly going and John Weller going puts into perspective how petty little arguments are a waste of time, and it brought us closer together.”

Being in touch with Weller again has heralded a new musical birth for Foxton – he played bass on a couple of tracks on his friend’s Wake Up The Nation album and has joined him on stage several times, including the original Wake Up Woking event two years ago.

Foxton had several solo hits after The Jam and then joined punk band Stiff Little Fingers – but in latter years he returned to his Woking roots, forming From The Jam in 2006 with the band’s original drummer Rick Buckler.

“It was great to be playing with him again and the audiences loved it,” says Bruce.

“We were intending to write new material from the start but it was too much to think about when Pat was undergoing
treatment.”

Buckler has since left to form If… but Foxton has continued with former Big Country drummer Mark Brzezicki, and Russell Hastings as singer.

“We’ve been writing for the past year and recording at Paul’s studio and he has played on three tracks. Steve Cropper from Booker T & The MGS has also played on it.

“We’re going back into Paul’s studio this month to finish recording and then we will get to mix it and it will become available on pledgemusic on July 1. It will be under my name and the working title is Back In The Room. I’m very proud of it.”

Four of the new songs have already been played at recent gigs by From The Jam, and Bruce says: “The reaction has been very favourable. Of course it’s all in a similar vein to what The Jam were doing because that’s the way I play bass. They’re just good pop songs hopefully.”

He also admits playing songs from The Jam’s 1970s heyday can become stale so they tend to mix it up.

“The real big hits like Town Called Malice, Going Underground and Start! are there all the time and we build the set around them but then work on album tracks, which stops the band becoming lazy or complacent,” Bruce explains.

“We played In The City last night and that was released 35 years ago! It’s scary in some ways but when I’m playing it feels like yesterday.”

From The Jam will headline Wake Up Woking 3 at the HG Wells Centre on Friday, June 22, and is there any chance Paul Weller may join them?

“I’m not sure,” says Bruce. “I suppose he might. It depends if he’s working elsewhere. I’m not hiding anything, I just don’t know.”

From: Woking News And Mail

Visit BruceFoxton.com for all the latest info and Tour Dates!