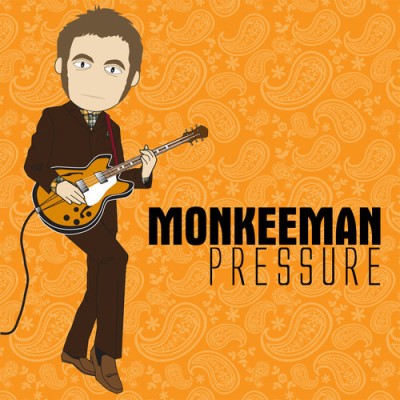 Long time Paul Weller supporter from Germany, and a great friend of us here at PWNews, Ralf Luebke aka Monkeeman is releasing a brand new EP on 27th of March and it’s a nice little power pop gem. Ralf is a part of our Internationalist family. So, if you’re unfamiliar with Monkeeman, we hope you’ll check out the sounds. Definitely worthy of your ears and support!

Monkeeman are a pop/rock act that has a truly international flavour to its new line-up. With a style and panache akin to The Smiths and Sex Pistols they have released three albums to date, all to critical acclaim in the German press. The first single “Universe” became a massive radio hit on German Radio. With Ep Pressure the band are testing the waters with Ireland and The Uk.

Ralf Luebke, the brainchild behind the band, felt it was time to get Monkeeman back on track and so after a three year hiatus he set about the process of recruiting a new line up for the band. In a very audacious move, Ralf decided that he wanted to branch out into the UK & Ireland. By June 2012 he had found the new line-up in Belfast in the form of Marty Connolly (former Rainbow Corner on Bass); Marty Kerr (former Back Issues Guitarist) and Marty Malone (former drummer with psychedelic outfit, The Vals). After various email and phone contact, the guys finally hooked up on August 7th 2012 in Belfast City Centre (hometown of the 3 Marty’s) for a solid two week rehearsal schedule. During this period, the band gelled very well indeed, playing some of the bands old tunes but also working on new songs for a forthcoming EP due to be released On March 27th 2013.

In October/November 2012 the Belfast boys travelled to Germany to record the new EP in Berlin with Patrik Majer, one of Germany’s top producers. The major accomplishment from this recording session in Freudenhaus studio was that all of the 5 tracks recorded were “live” takes, capturing the retro sound of the band and proving what an excellent live act the band truly is. The band also played an electrifying sell-out gig in Wilhelmshaven’s Kling Klang venue in front of a brilliant audience.

Monkeeman have confirmed two gigs at the International Pop Overthrow Festival in Liverpool at the Cavern Club at the 18th and 19th of May.

The new EP will be available on general release from 27th March on iTunes, Amazon and all good online stores.