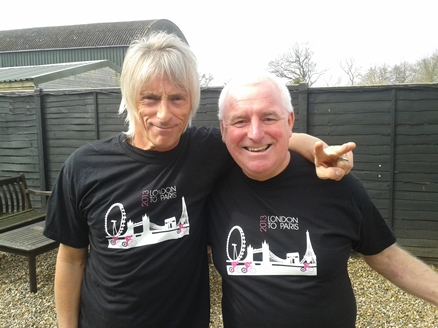 Hospice supporter, Sam Molnar was delighted when his friend, Paul Weller agreed to support his up coming London to Paris bike ride. Sam from Byfleet has been training hard and will take on the gruelling challenge on the 17 April to raise money for Woking Hospice – A total of 300 miles over 4  days!

Sam has been a big supporter of Woking Hospice ever since his Mum was cared for tby us over 6 years ago and in 2010 Sam asked his friend Paul Weller if he would do a concert in Woking to raise awareness and profile for Woking Hospice. Paul willingly agreed and ‘Wake Up Woking’ was born raising a staggering £62,000 on the night.

Paul has continued to support the Hospice and also wanted to help Sam promote the bike ride. He has therefore signed the T-shirt he is wearing and also signed a copy of his latest CD, Sonic Kicks and the Hospice are offering the chance to bid for either item. Send your BID in a sealed envelope to: Lorraine Weedon, Woking Hospice, Hill View Road, Woking, Surrey GU22 7HW by Monday 22 April 2013. Or you can email info@wsbhospices.co.uk The winner will be notified on the 23 April 2013 and all money raised will go directly to Woking Hospice. 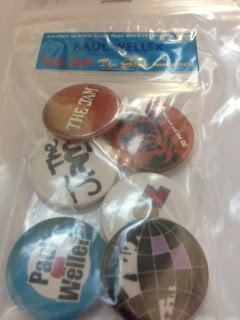 Also from Jon Abnett in support of Woking Hospice and Sam Molnar, you can purchase these limited edition badges.
Hi All
As past supporters of the Hospice. I have designed and had manufactured a Limited badge set of 30 only. The proceeds of this set will go to Sam Molnar’s Just giving page. (Wake up Woking 1 promoter), who is cycling from London to Paris in a couple of weeks time.
The cost for this badge set is £6 per set inc P&P. Please make cheques payable to J Abnett, I will then make one payment to Sam’s Just giving page to make life easier.
Please send me your address for badges to be posted out. THANKS FOR YOUR SUPPORT
jon.abnett@phoenixphotosetting.co.uk
Cheers… Jon 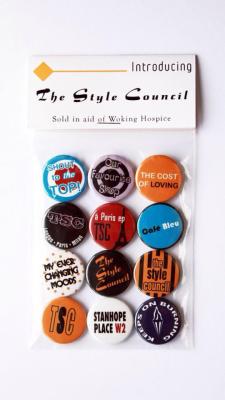 If you’re interested in a Style Council set of badges:
The Style Council 30th Anniversary Commerative Badge set in Aid of Woking Hospice.
£11 inc postage in the UK.
Email:
W.Denty@wsbhospices.co.uk to order and postal rates for ROW
This special edition set is STRICTLY Numbered and Limited to 50 sets only!