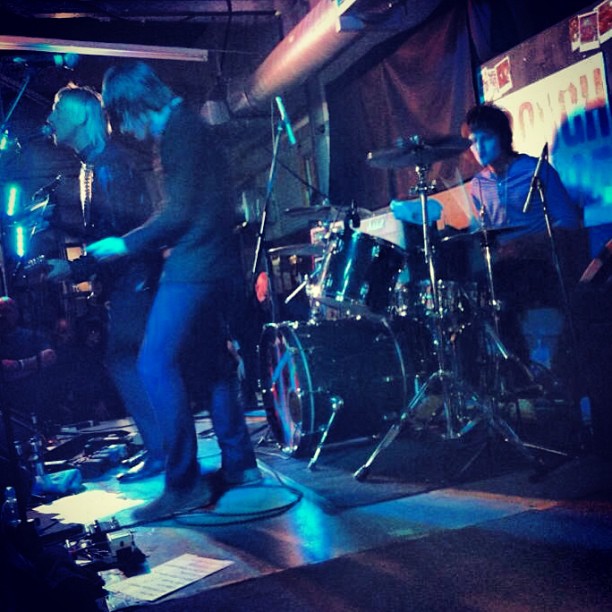 Headlining the shop’s day of in store gigs, which also saw performances from the likes of Frank Turner, King Midas Sound and a separate set from The Strypes themselves, Weller enlisted guitarist Josh McClorey and bass player Pete O’Hanlon as well as Miles Kane’s drummer Jay Sharrock to join him for a thirty minute set.

Entry was by wristband only and saw fans queuing from 4am this morning to gain access to the completely sold-out event.

Kicking off with The Jam staple ‘In The City’, the intergenerational band then stormed through a number of Weller’s solo cuts including Record Store Day release ‘Flame-Out!’, ‘Fast Car/ Slow Traffic’ and ‘Kling I Klang’.

Weller then introduced the other two members of The Strypes, singer Ross Farrelly and drummer Evan Welsh, joking that they were “on loan for one day only” for a rousing run through of ‘Woodcutters’ Son’.

The band then continued with a cover of Beatles classic ‘Slow Down’, Weller staple ‘From the Floorboards Up’ and recent album title track ‘Wake Up The Nation’ before exiting to huge applause and then re-entering for an impromptu encore of ‘Route 66’ with Farrelly taking lead vocals – you can watch fan-shot footage of this below.

Speaking before the gig, guitarist McClorey expressed his enthusiasm for the event, stating that their set earlier “was packed out. There were loads of kids down the front and it was just a really good vibe and a good day”. He also explained how their collaboration had come about, informing that, “we did a gig last year together at Abbey Road, we supported him for that so that’s how we met. Then his manager just called up and asked whether we wanted to do something for Record Store Day. I’m a massive fan of The Jam and of his solo stuff so it’s great.”

Fans were also in high spirits about the gig, with James, 24, from West London telling us that he’d “stuck around for a few of the bands at Rough Trade today, but Weller was something else. Record Store Day is great because it really gets people caring about shops like this.” Joe, 48, from Sheffield also said that he’d come all the way to London for the instore and to get Weller’s release, adding that “It was great that he got The Strypes up. They’ve really got the whole young mod thing going, they remind me of Weller when he was younger.”

Paul Weller played:
‘In The City’
Fast Car/ Slow Traffic’
‘Flame-Out!’
‘Kling I Klang’
‘Woodcutters’ Son’
‘Slow Down’
‘From The Floorboard Up’
‘Porcelain Gods’
‘Wake Up The Nation’
‘Route 66’
Cheers to ogdensflakeynut for the videos
Image credit: Lola Rose