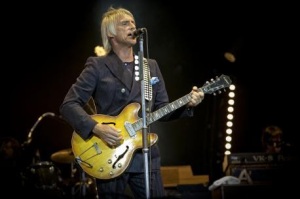 From The Bournemouth Echo:

PAUL WELLER hasn’t played Bournemouth since his Wake Up The Nation tour several years ago, so it was a pilgrimage to Southampton to see the Modfather in action. It’s been a good time for Paul of late with critical praise for new album Sonik Kicks and recent headlining turn at the Isle of Wight festival.

Perhaps it was this adulation that found Paul and his band in a comfortable and assured place on stage. The usual Weller fire was replaced by a feel-good vibe that saw the first 40 minutes coast along with assorted numbers such as Dragonfly, Going Places and an outing for The Style Council’s My Ever Changing Mood.

When it seemed the audience were getting too relaxed, Paul casually upped the tempo. “This is an old English folk song” and we were gifted That’s Entertainment, followed by Start! and The Changingman.

After a cigarette break length of time, Paul and the boys returned for an encore that saw That Dangerous Age and a glorious Town Called Malice that lifted the roof of the Guildhall. Not a vintage performance, but one that will undoubtedly grow as the tour continues.

Paul Weller
Guildhall, Southampton
June 27, 2013
Sunflower
Wake Up The Nation
Flame-Out!
From The Floorboards Up
Fast Car, Slow Traffic
Sea Spray
My Ever Changing Moods
Kling I Klang
The Attic
Going Places
Friday Street
Porcelain Gods
When Your Garden’s Overgrown
Above The Clouds
Dragonfly
7&3 Is The Strikers Name
Peacock Suit
That’s Entertainment
STaRt!
Whirlpools’ End
The Changingman
Out Of The Sinking
That Dangerous Age
Be Happy Children
A Town Called Malice
Cheers to Barry Sowle For The Set List!