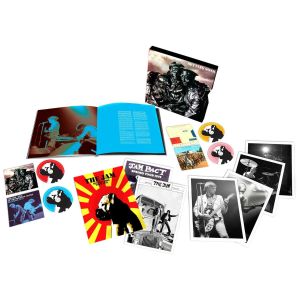 – One of the most popular bands to emerge from the English punk rock scene of 1977; The Jam had a phenomenal impact on pop music and wider youth culture. In their short career, along with the Sex Pistols, The Clash, and Buzzcocks, they influenced a generation with their music, style, politics and inspiration.

Taking creative direction from a wide sphere of influences – The Who, Dr Feelgood, The Kinks and Motown to name a few, they achieved 18 consecutive Top 40 singles in the UK (including 4 number 1s) – they had a fanatical following, their singles entering straight in the top 10, or number 1 in some cases. Their gigs sold out within minutes.

Still beloved of original fans and new supporters through Paul Weller’s solo career – he still plays many of the Jam songs in his live sets today.

Released at the end of 1979, Setting Sons reached number four in the U.K. and for many fans and critics it defines the classic ‘Jam sound.’

It was initially conceived as a ‘concept’ album, with a distinct link between key songs – Thick As Thieves, Wasteland, Burning Sky: this idea may have seemed strange to the band’s hardcore fans, but had a precedent with some of Weller’s 60s heroes, notably The Kinks, Small Faces and The Who. Setting Sons took The Jam’s musical template and added a narrative depth and compositional daring which would take their art to a totally new level.

The anti-war song Little Boy Soldiers, constructed in three parts, illustrates how the band were moving into a more experimental and ambitious style, whilst retaining the muscular edge for which they were so famous. The album includes the hit single – The Eton Rifles, Bruce Foxton’s tour-de-force Smithers-Jones and live favourite, the storming version of the Motown classic Heat Wave.

The ‘super-deluxe’ box set traces the path of the classic album from initial demos, the two hit singles, ‘Strange Town’ and ‘When You’re Young’, that preceded the album; alternate versions of songs, dynamic live performances, singles and b-sides, through to the point in early 1980 where the Jam’s sound and success coalesced into ‘Going Underground’ – the band’s first number 1 single.