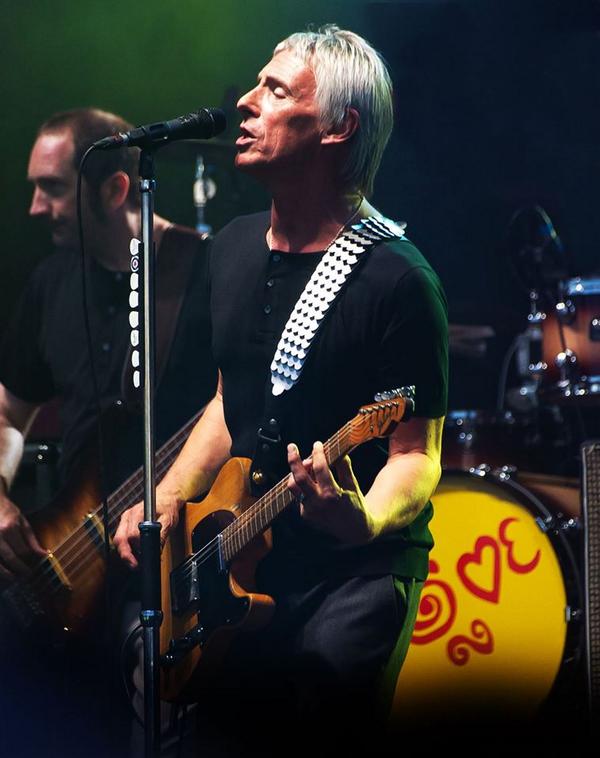 We were reminded of what a great run summer of concerts it was in 2014 by this excellent review of Paul’s last UK gig of the year at Audley End sent in by our good friend, and PWNews UK field reporter, Tony Allen!

Paul Weller played his final scheduled British gig of the summer to an enthusiastic crowd at Audley End House near Saffron Walden on the 26th July 2014, performing a 25 song set featuring the return of several songs from million selling album Stanley Road and finishing with the usual rousing rendition of “Town Called Malice” for the Modfather’s second encore.

Weller played a similar set to many of his other appearances this year, racing through the early tracks before pausing for slower meanders through some of his more mellow numbers. Twice in the evening, Weller thanked the “fantastic” crowd for their support all summer, but went to lengths both times to stress that those in attendance were not witnessing anything more terminal than his final UK appearance this year.

Those fans who arrived early and set up their folding chairs in one of the car parks overlooking the lake in Audley End’s picturesque gardens with a picnic had the opportunity to hear the band’s soundcheck, which interestingly featured two songs not used in the actual show, “Into Tomorrow” (twice) and “Dragonfly,” in addition to renditions of “Broken Stones” and “The Attic.” In the sweltering afternoon, there were many small aeroplanes which flew past over the heads of the early arrivals.

The distinctive riff of usual starter “Sunflower” launched the gig almost bang on time after Telegram opened with half an hour of their work. The usual fast-paced beginning travelled forward in the chronology of Weller’s extensive back catalogue as he tore through “Wake Up the Nation” and “From the Floorboards Up,” his usual storming start. “Fast Car/Slow Traffic” came next, sounding superb in the sultry summer heat with the usual backing vocals from Weller’s band. “Come On/Let’s Go” bridged the gap perfectly to the next stage of the performance which took a calmer turn to the electric opening.

“Sea Spray” was executed brilliantly, really making use of percussionist Ben Gordelier with his chime bar and keyboard player Andy Crofts for that special effect captured faithfully from the “22 Dreams” album. It was a busy week for the pair, as their band The Moons had also seen the release of their critically acclaimed album “Mindwaves.”

Weller then introduced what turned out to be a classy version of an “old tune”, “My Ever Changing Moods” by The Style Council, which is sounding very slick at the moment. Interestingly, The Style Councillors, the only tribute act dedicated to Weller’s second band were in action at the same time less than an hour’s drive away in Brentwood.

Weller took to the keyboard on three separate occasions, the first of which to treat fans to one of two slower songs from 1995’s “Stanley Road.” “Broken Stones” was a real crowd pleaser, receiving a warm reception afterwards.

An extended, somewhat laboured performance of “Foot of the Mountain” followed, taken from Weller’s second solo effort “Wild Wood,” one of his most revered albums amongst fans, featuring the iconic silhouette cover. “The Attic,” from 2012’s experimental “Sonik Kicks,” jolted the crowd back into the present, in time for “Going Places,” arguably the pick of 2002’s “Illumination.”

As always, a superlative “Friday Street,” followed by the expansive “Porcelain Gods,” buzzing with effects, made full use of the six-strong group on stage. Weller stayed in the 1990s for one of his earlier solo singles, “Above the Clouds,” performed with skill which relaxed the mood ahead of the popular “You Do Something to Me,” again on the keyboard.

“7&3 is the Striker’s Name” came next, the song recorded in 2009 with My Bloody Valentine’s Kevin Shields on guitar. Weller and Steve Cradock had it covered this time, pitching the punchy sound just right. The rasping commentary of Weller, strutting around the stage head jutting out, translated well into following number Peacock Suit too. The explosion of noise and lights in these two punchy songs sparked the crowd back into life.

There were a few spots of rain which crept in around this point however it never amounted to anything much and the quickly passing cloud hardly lowered the temperature. In fact, it cleared in time for the hoardes to see the orange sun setting in the distance behind the seventeenth century English Heritage owned stately home, built on land once belonging to Thomas Audley, Henry VIII’s Lord Chancellor. Weller appeared as the first of three concerts in the grounds of the venue.

Three excellent tracks then closed the main set. Jam classic “STaRt!” was only the second song of the night from before 1990, and afterwards Weller thanked his UK fans for making his 16 date British run which has taken him to England, Wales, Scotland and the Isle of Man in the space of three months “very special”, before directly quashing fears that they would never ever see him again, quickly jesting “not that we’re going!” after a somewhat questioning response from the packed field.

The re-introduction of “The Changingman,” not heard at every live date this year excited fans young and old. The superb performance from Weller had strong echoes of that on the live album “Catch-Flame!” from the Alexandra Palace, recorded ten years ago next November with an extended ending. The fact that the performance lost nothing compared to perhaps the career-best rendition of his signature single gives an indication of the good place Weller is in at the moment.

“Whirlpools’ End,” one of the stellar songs of this tour, could have been a fitting way to end as the stage cleared, but those who had seen Weller before knew more was to come as he hadn’t yet introduced his band. Soon after, to the delight of those who had been calling for a return, the band trooped back on stage. “He’s the Keeper” was explained by Weller as “a song I wrote some years ago… dedicated to the late, great Ronnie Lane”, as he wrote in the sleeve notes to “More Modern Classics,” keen to dispel any thoughts which may have occurred to newer fans that Weller was simply jumping on the latter day Small Faces bandwagon.

“Out of the Sinking,” the sixth and final track performed from Stanley Road, preceeded “Picking Up Sticks,” for which Weller sat at the keyboard again, to introduce his band and allow a cracking extended drum solo from Steve Pilgrim. This time, bassist Andy Lewis was described by Weller as being “in a pensive mood”, something which was not, luckily, reflected in the flawless performance of the consummately professional DJ, producer and sharp dressed man (on the night he combined black shoes with lighter trousers). This segment ended with Weller staying where he was for “Be Happy Children.”

The final track from “Sonik Kicks” was accompanied as ever by stunning lighting effects, which seemed to hang in the air above the stage. The visual complemented the sonic all night, with the flashing accompaniment to “7&3” and the lower lighting for some of the slower “Stanley Road” songs. The reverberations from “Be Happy Children” rung around the crowd for several minutes after the band had exited the stage.

However, the boys emerged from the white marquee to the right of the stage for a second time, answering the calls of many fans to finish with a bouncing version of the Jam’s “Town Called Malice.” Far from Weller’s most recognisable song being the millstone around his neck, as the whole idea of the Jam seemed to be for many years after their split, Weller is now embracing his past, leaving the assembled fans on a huge high. The excellently supportive crowd was very slow to clear after the second and final encore, lingering well into the balmy evening.

Coming to the end of his extensive summer touring schedule, Weller had only one more appearance in August, at the Umbria Rock Festival in Perugia, Italy. Then, in September, the band embarked on a six-date tour of the United States and Canada. American fans were rightly very excited and for Weller’s British contingent who have been assured that this so-called best backing band ever will be back, we already can’t wait for what next year will bring, with a mooted new album rumoured to be featuring original Jam guitarist Steve Brookes as a guest and hopefully another tour. The end of Weller’s British appearances in 2014? I wouldn’t get too “Hung Up.”