A new box set listing has appeared on Amazon UK. Not a lot of info, but what we get is the title, “Fire And Skill: The Jam Live” along with the release date of, 30 October. With Paul starting his Autumn tour of the UK just a few weeks later, it would indeed seem to be perfect timing. Additional info via Amazon states the set will comprise 6 discs, but no breakdown details for CD/DVD make-up.

Long time Jam A&R man, Dennis Munday checked in to our facebook page and gave Paul Weller News a list of Jam concerts that were professionally recorded and in the vaults. That may give us an idea of what gigs might show up in the set.

As always, we’ll be keeping a sharp eye out for any additional information regarding this release. The current price is a fairly steep £78.99 (*Updated Price via PW/Universal Offcial is £59.99) . So, we can only hope that it’s a quality release and well worth the dosh!

You can pre-order “Fire And Skill: The Jam Live” HERE over at Amazon UK. 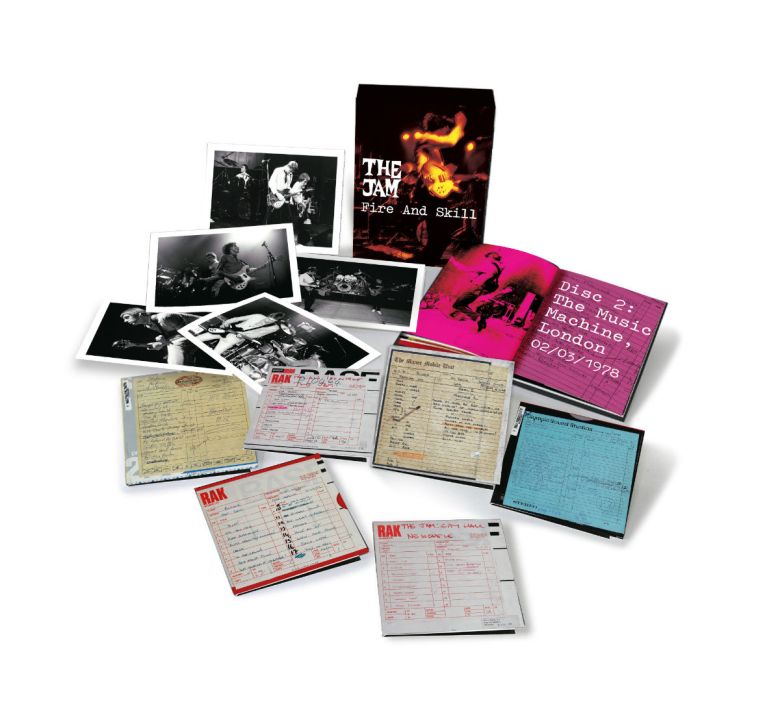 Named after the legend painted on Paul Weller’s amp, ‘Fire And Skill’ is a superb six disc boxed set – featuring six previously unreleased concerts, one from each year of The Jam’s major-label career.

Starting with an incendiary early gig at London’s famous 100 Club from 1977, the show featured took place 10 months after they first played the venue in November 1976, and was recorded for broadcast on American radio ahead of the trio’s inaugural visit to US in October 1977 for a six-date tour.

A Music Machine show from 1978, featuring most of the 2nd album – ‘This Is The Modern World’. The show was The Jam’s sixth live show of the year and one of four low-key shows in the capital to fanfare their new ‘News Of The World’ single under the banner ‘The London Blitz’.

Reading University, February 1979 – playing material from their breakthrough album ‘All Mod Cons’, was The Jam’s first live appearance of 1979, and found the band in a radically different place to their showcase at the Music Machine 12 months before. In that time, their third album, ‘All Mod Cons’, had been released to critical acclaim, and their status as one of the New Wave’s most musically substantial and exciting bands had been secured. And Weller was still only 20 years old…

Newcastle City Hall – October 1980, previewing songs from forthcoming album ‘Sound Affects’. In the time between The Jam’s show at Reading University on Disc 3 and their appearance at Newcastle City Hall 20 months later, there had been more extraordinary developments in the group’s world. ‘Setting Sons’, their fourth album, had given them a Top 3 hit with ‘The Eton Rifles’, which was followed in February 1980 with the stirring Number 1 single, ‘Going Underground’. After three years on Polydor, The Jam had finally become the biggest group in the UK.

One of the band’s final ever gigs at Wembley Arena – 1982. Late in 1982 The Jam announced they were splitting up – there would, though, be a final chance for fans to experience The Jam’s astonishing live shows, with a 14-date ‘farewell’ tour announced for late November and December. The centrepiece was a five-night stand at Wembley Arena, the 10,000-capacity shed next to the London football stadium (the recording here is from the second date), the biggest live venue in the capital.

Packaged in mini, lift-off lid box this set includes a separate hard-back book and individual gatefold wallets for the discs, as well as new essay, period photos and rare memorabilia. All audio has been remastered at Abbey Road.